Tranquil and Marvelous: Opening Day at the Getty Villa 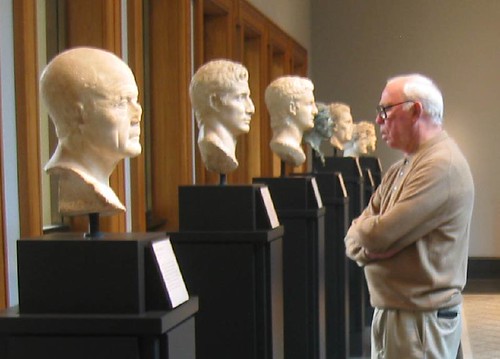 At the last minute, I was able to score some tickets for the Getty Villa on opening day but was really reluctant to go anticipating opening weekend crowds, parking lot hassles and crowded exhibits. Yet, it was an ahh-fest from the moment we drove up the driveway off PCH to when we left the museum driveway. I guess that’s what the timed tickets were for.

From the LA Times:

The Getty deliberately downplayed the opening to avoid hoopla or crowds that would have run afoul not only of neighbors but also attendance and traffic restrictions imposed by the Los Angeles City Council as a condition of approving the renovation.

After we were guided to the lot through three different checkpoints, we finally made our way to the virtually empty parking garage. Upon arrival to the first set of many staircases, a museum volunteer greeted us by handing us opening-day laurel wreaths. Sara asked me, “Are you going to wear that?” True, they were like high-brow Mickey Mouse ears in this ancient world museum, but…hells yeah! It was funny to see everyone from seniors to tweens wearing them…the only ones not wearing them? The children. 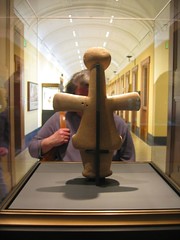 Overheard at the Getty Villa on Saturday:

“‘Bactria.’ That must be where the word ‘bacteria’ comes from.”

The museum and its grounds–from amphitheater to its gardens–were just beautiful with ample subjects to photograph. I couldn’t get enough. In fact that’s basically all that we did and I don’t think it would have been as fun if we weren’t taking pictures of every bit. There’s something about zooming in with a camera that makes me more appreciative of every moment. After skimming over the Roman, Greek and Etruscan artifacts, I wanted to run to the gardens. I’ve seen that pool in all the published pictures of the newly renovated museum and now I wanted to see it for myself. 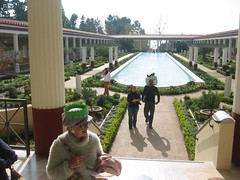 Being a gorgeous day, the blue pool sparkled. Black statues with eery white eyes populated the garden. The occasional couple strolled the stretches of marble-floored, columned hallways which sat on either sides of the pool.Finally exhausting the garden, we revisited the exhibits. The highlights were the “Antiquity and Photography” exhibit and the “Getty Villa Reimagined” one. The former displayed 19th-century photographs of ancient Mediterranean sites while the latter traced the development of the Villa through original sketchbooks and models.

With my camera battery low, my memory card full and my stomach on empty, we finally made our way to the museum cafe. Just as I suspected the grab-and-go cafe offered everything from $5.95 three-cheese pizza to $13 pasta entrees.

I considered it briefly since sitting on the terrace would have just completed the museum visit, but being cheap and famished we opted to eat elsewhere. In any case, I had my fill of the Getty Villa, at least until I get to come back in April to use up my initial tickets.