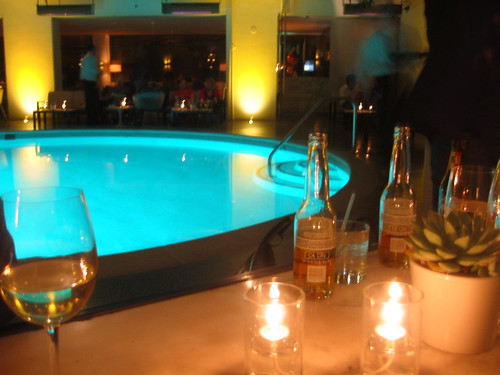 Attended a bon voyage party at the Blue on Blue Bar in Beverly Hill’s Avalon Hotel last night for a friend leaving for London for six months, and I have to say that I wasn’t too impressed with the venue. Maybe it’s because we were sitting at a poolside cabana in the middle of January that made it a not-so-fun experience. Hmm. Or it could be the slow-as-molasses waitress or the 11 o’clock curfew. So many things.

Of course, I’m sure this place is a hoot during the warmer seasons for all those who love to lounge by its blue kidney-shaped swimming pool and entertain themselves in its surrounding cabanas. And reviews have stated Blue on Blue–restaurant by day, bar by night–to be the industry hangout.

I will say that I loved the extensive martini list (everything is $12, including non-‘tini cocktails). I had an espresso martini that had Kahlua, Vanilla Stoli, vanilla schnapps, espresso and cream. It tasted like an actual espresso shot with nary a hint of liquor. Very dangerous, and I loved it. There was also a key lime martini made with the actual key lime liqueur that the Abbey uses so I know it must be good, too.

Blue on Blue was great for people watching a crowd that came at 9:30 and left by 11. But what gave my favorite pastime an edge was the bright blue pool in the middle of the patio as people tried to carefully maneuver around crowds standing around its edges.

I waited with my camera at the ready just in case someone either drunkenly fell in or got “accidently” pushed in. You just have to wonder how many people have inadvertently taken a dive with a bustling bar nearby and a packed patio on weekend nights. We wanted to ask the waitress but she, what a surprise, couldn’t be found.