Bingo at Hamburger Mary's: Legs to Heaven, B-11!

You haven’t played Bingo until you’ve played it at West Hollywood’s Hamburger Mary’s. Every Wednesday night1, the fabulous Belle Aire2 hosts the craziest, funnest game of Bingo I’ve ever experienced, and that includes the game I played at WeHo’s Mickey’s with the Sisters of Perpetual Indulgence one drunken Sunday afternoon.

The burger joint is packed to the gills with the young, gay and weird, plus a lot of beautiful people, most likely in the industry. The bingo cards are flying fast and furious, the drink specials are dangerously potent and it’s all done at full blast as Belle Aire likes to constantly remind the audience, “What’s the name of the game?” “BINGO!!” “How do we play it?” “LOUDLY!!” 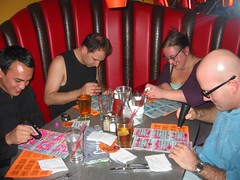 Every week the proceeds from the game are donated to a different charity, which is great since so many people show up. The event starts at 8 but you have to show up around 6:30 to secure a seat! I kid you not. Show up at 6:45 and you’re SOL on the sidewalk. It’s a suggested $20 donation for 10 bingo sheets but if you sign up with the exclusive Bingo list at bingoboy460 @ yahoo.com3, you’ll get an email to receive double the amount of sheets. What do you get when you win a round, apart from a run of shame through the restaurant and a pelting with losing game sheets? Why, many fabulous industry swag. The night I went it was an autographed Napoleon Dynamite DVD, the DVDs for Seinfeld Season One, and a Desperate Housewives “I’m Desperate” T-shirt, among other things.

If you don’t win a game at all, you still have a chance at winning an auction depending on how badly you want what’s on the auction block. One auction was for six tickets to Disneyland’s exclusive Club 33 with entrance to both Disneyland Park and California Adventure AND a tour of the park given by the original Tinkerbell model, Margaret Kerry Willcox. The winner paid $700 for this package. A bargain!

The quick and dirty: There’s free parking in the WeHo City Hall parking lot, a double mango “Cosmo” is $6, and there’s only one bathroom (hint: the room with the shiny disco ball and toilet) for the entire restaurant.

Next game is Wednesday, January 18
Benefiting The L.A. Free Clinic