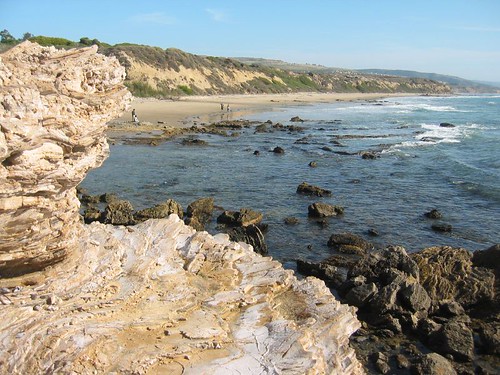 I finally found someone to check out Crystal Cove with me! Ever since I first read about it in CitySearch, I’ve been wanting to go:

A good example of pre-development coastline, Crystal Cove has three-and-a-half miles of beach and 2,000 acres of undeveloped inland woods. The interior is popular for hiking and horseback riding. Mountain bikers use the inland areas and divers use Crystal Cove underwater. The beach is popular with swimmers and surfers. Visitors can explore tidepools and sandy coves.

But 1) It’s about 60 miles a way and 2) None of my friends are THAT interested in nature where they’d want to go venturing 60 miles a way for it. A new bar in Hollywood? Sure! But tidepools in Newport Beach? Nah! I need to get some sporty friends.

Anyhoo, my one friend who agreed to go is a burgeoning photographer, too (except better), so she was excited by the prospect of going on a photography expedition.

It was such a gorgeous day and yet the Cove wasn’t crowded. Just a school bus of kids on a field trip and a smattering of families enjoying a beach day with frisbees and tidepool touring.

Even though we walked at a snail’s pace taking pictures of EVERYTHING, it felt like we covered miles of ground (in reality it was probably about a mile). The landscape of the beach varied from straight-up sand to tidepools to a rock wall that I was able to scale. From my perch I could see scuba divers in the ocean, cuddling couples sitting together near splashing waves and my friend looking up at me saying, “OK, now how are you going to get down?”

When we got over all the beauty that is nature, we decided to check out the Historic District of the park, a group of beach cottages of vernacular architecture that were made in the ’20s and ’30s. Apparently, it’s the last of such beach communities from that time.

It was only afterwards in reading up on Crystal Cove that I found out that the names were of the families who owned the homes. And that this cove was used during the Prohibition by rum-runners smuggling their goods to shore and was also used during the silent movie era for south seas production.

So after hours in the sun, we were exhausted and I was so glad to call it a day. I was just a little sad we didn’t get to explore all the hiking trails in the Cove’s interior. But I guess I’ll just save that for another time.