The Wrens at the Troubadour 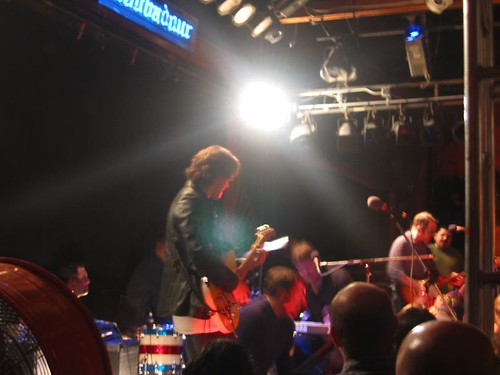 Got invited to see the Wrens at the Troubadour. I have no idea who they are and apparently not many people do either. They’ve been around since 1989 and have had a string of bad luck with regards to record companies but they’re still together through it all. Playing their music and loving what they do.

They mean a great deal to Michael and I remember him trying to get me to download them in my iPod when I first got it so I figured I should see what all the fuss was about.

Mind you, I’m not a music reviewer so this post will be more about the overall feeling of the gig and of the Troubadour.

First, I felt like I was overdressed for the place. Everyone was in jeans and T-shirts while I was wearing knee-high boots, denim skirt and a sparkly black tube top. Yeah, too fancy for the Troubadour. But I always dress up. Ask anyone. Anyway, I have a feeling that’s why we got passes to go to the Loft, the VIP section of the venue. At least that’s what I’m going to tell my friends. I have no idea why the doorman handed us those passes. Door prize?

There were about two opening acts before the Wrens so Michael and I hung out in the Loft, drinking whiskeys (no Jameson!), and people watching through our nifty, superior-than-thou window overlooking the crowd and stage. Finally after a couple of hours, the Wrens came on stage. They were definitely a lot better than the bands preceding them. Could I understand their lyrics? No. But I did like their energy, their music and the adoration of their fans. At one point, since it was one of the guys’ birthday, the crowd spontaneously serenaded him with “Happy Birthday.” And at the end of the concert, the Wrens invited everyone to join them at the Beauty Bar for their after party. How sweet was that? Wish I could say we went but I had smacked my head on one of the low-hanging wood beams in the rafters and Michael enjoyed the concert to the point of exhaustion.

Overall, it was a good show and I think I’ll be downloading some of their songs to my iPod now. Thanks, Michael!