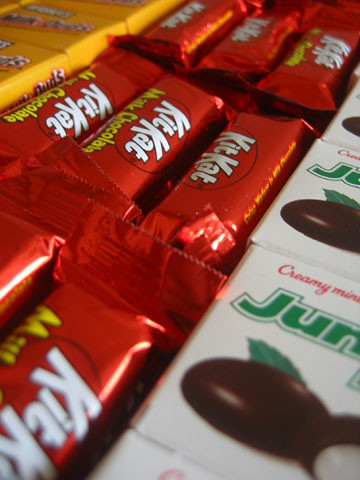 I like to throw parties for no particular reason, well, if only to collide worlds by getting all my friends together in one place. These parties usually range from singles mixers at a cool bar to board game night at my place.

Tonight I decided to throw a “Really Bad Movie Night” for just the girls. That way we can watch sappy movies without having to take shit from the guys. So I sent the evite out and polled the girls asking them which bad movies they’d like to watch. Last time I checked the poll Boogeyman and Monster-In-Law were neck-and-neck.

This movie night is a variation on an outdoor movie night party idea I saw in a magazine, but since it costs about $150 to rent a projector and I don’t have a backyard….

Food & Drink
For appetizers I’m going to buy some microwaveable White Castle cheeseburgers and then order pizzas for the “entree.” Since it’s almost Halloween I was able to find mini Milk Duds, Junior Mints, Whoppers and Kit Kats for my “concession stand” and arrange them on a tray. Drinks will be bottled beer and old-fashioned bottled soda in a tub of ice. But as my guests arrive I’ll prepare NC-17 Root Beer Floats for their welcome cocktails.

During the movies there will be bowls of flavored popcorn available and then for a closer I’ll serve trays of Klondike ice cream bars and fruit.

Setup
The table in the dining room will have the pizza and tub of drinks. The concession stand will be by the viewing area: a blanket on the floor surrounded by pillows as well as couch seating. Enough for my small gathering.

Post-Party
Instead of distributing goodie bags at the end of the party, I’m going to raffle off some previously viewed DVDs I picked up from Blockbuster: one an award-winning movie, the other a really bad movie you’d be embarrassed to own. Spices things up.

In retrospect it would have been better to throw this party closer to Halloween, THAT way we could make it a scary movie night and rent horror movie classics. But I’m sure this will be just as fun.