I was looking for a cool place to take a friend to celebrate her birthday. Wasn’t looking for anything Skybar hip or low-key divey. Just something new, different and fun to give my Los Feliz-centered pal a good time.

That’s when I came across a tidbit on CitySearch about this new club, RokBar, based on a popular Miami dance club and backed by Tommy Lee and Dave Navarro, but it wasn’t really a review so I had many questions. Is it a music venue? That would make sense, right? Do they have a strict velvet rope policy and only allow hot girls in short skirts and the occasional rock star dude to breeze through? Or is it appropriately divey with peanuts on the floor and a jukebox stuffed with heavy metal tunes? But more importantly, can I get away with wearing jeans and a camisole or do I have to put on a sequin mini and a belly-button-clearing top to get in?

On further research, I found that good ol’ LATimes.com reviewed it yesterday. They call it a club but there’s no mention of a dance floor (how are you supposed to dance to “Pour Some Sugar on Me” anyway?).

Apparently, there isn’t a velvet rope, but the 6-week-old club entertains such celebs as Carmen Electra and Pamela Anderson. The scantily-clad waitresses bop around the bar and deliver drinks with such names as Cotton Candy and Effen Blue Balls, priced about what you’d expect for Hollywood Blvd. West, not East.

Rather than building nights around promotors, we’re building an organic crowd,” says Reid Strathearn, Meridian’s director of marketing. “It’s about people who love rock music and want to enjoy it in an upscale bar rather than your typical rock dive.” 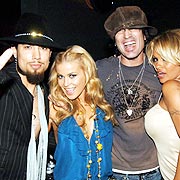 With that being said, I think I’ll save Rokbar for an off-night when the spotlight isn’t on the clubgoer and instead take my buddy to Koreatown for some karaoke or to Chinatown’s Firecracker dance club — fun, different, divey hip.